I, Zetdogg, speak! The threats to Zetlandica from tourism, bicycles, fishing boats, plastic waste, wheelie bins, environmentalists, golf and Donald Trump, and how sheep-stalking could provide an economic boon/boom 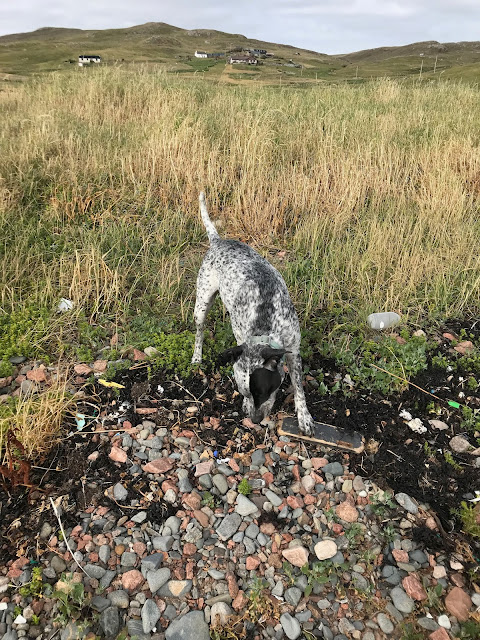 It’s been a frustrating week here in the Greater Zetlandics, full of tourists, birds and the usual oversupply of sheep, all thwarting attempts by the Human Companion to provide I, Zetdogg  (and himself) with exercise of a varied and inspiring kind.

I mean, tourists are all very well. They provide much-needed cash, fresh faces to bark warningly at or nuzzle affectionately in the hope of treats, and pleasantly fragrant suede shoes to pee upon (for some reason, this piece of politeness often fails to impress).

But the cheapskate and somewhat threadbare travellers (not like those rich, though sometimes shoplifting-prone cruise liner passengers) who come here in their camper vans, motorhomes or lugging tents either on their backs or on ill-advised bicycles (it’s often windy here)...they usually come supplied with their own dried noodles, gluten-free vegan dairy-lite  oatmeal and cashew stew, hemp underwear and vegetarian plastic shoes, thus contributing little to our proud wool-and-dead-animal  economy. But they frequently abandon their vegetarian shoes on our beaches, thus adding to the mountains - mountains I say, bigger than any hill on Zetlandica - of  polyethylene rubbish that accrues hereon.

I know much of this is to do with oceanography - these islands are trapped in the tidal drift between North Sea and North Atlantic, a catch-all for all the fishing industry’s artificial shoal-slaughtering aids. And make no mistake, though no-one likes to mention it in Zetlandica, it’s fishing boats that cause most of this. People here prefer to don biohazard suits and just quietly clear up the mess as best they can, once or twice a year, ignoring the cataclysmic tsunamis of plasticrap and toxic chemical waste which inevitably wash up next day from the sandeel hunters and codling chuckers-back.

I understand from the HC’s grumpy shouting on the subject that some environmental campaigner arrived here and said Zetlandica’s beaches were the worst for plastic waste he’d seen anywhere in the world, He caused mortal offence and much huffing and puffing among the local bourgeoisie, who worry about such things. But this noisy Greenpeacian is right. This week, two seals were found wrapped in plastic fishing next. One died. Now, don’t get me wrong, I hate seals, and so do all fishermen and every salmon farmer, but none of us would wish such a fate on them.  How else is an aquaculturalist supposed to learn how to shoot?

And speaking of shooting and sheep, as we almost were, I have always believed that some kind of  ram-stalking could flourish here as a harder alternative to the hunting of deer by toffs which brings in much cash to tweed-wearers in High Scotland. Much more dangerous, as sheep retaliate when injured, or even offended, as I know to my cost. Talk about dogs worrying lambs! When you’ve been head-butted by an angry ewe, you know all about it.

In the wider world, we have had to face the disturbing thought of Chairman Trump arriving in Lower England and even That Scotland, or Ayrshire. Many blandishments have been offered to his Organisation of Transcendent Evil by The Convocation of Zetlandicism in order to convince him that all Unst should be turned into a golf course, though his demands that he should be given Jarlshof and The Broch of Mousa as hotel sites seems to have fallen on deaf ears, or stoney ground, or Fetlar.

Meanwhile, the arrival of wheelie bins and demands from the C of Z (Environmental Princedom) that everyone recycles their plastic, paper, glass and unwantted eBay purchases so it’s easier to landfill has brought consternation here in the Isles of Doom. Customised hooks to attach the (especially lightweight so they won’t hurt sheep) bins  to walls in order that they don’t blow away are being manufactured and sold, but have not as yet been tested. We await the first hurricane of the summer, which will eradicate all visiting cyclists at first puff, and could send fleets of plastic bins out to sea as a kind of retaliatory plastic hazard to fishermen.

I, Zetdogg, will keep you posted.