Braggart is here! There's been a Mordor, and Dogs (not) in Space 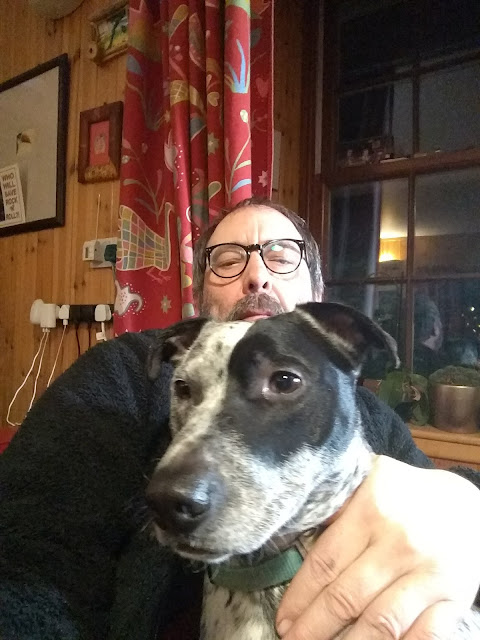 Greetings, Dogg lovers! This week I chased a tourist and very nearly levitated a fence in pursuit of said Gore-tex-clad individual, had I not been strenuously detained by the Human Companion in as tetchy a mood as I’ve known him. I believe this may have been caused by over-caffeination, to which he is undoubtedly prone. He has been lurking in the Peerie Shop Cafe again, Lerwick’s prime source of coffee beans, imported from that well-known source of such drugs, Perth.
Why was I chasing said money-dispensing visitor to our beloved archipelago? Threat! He represented a threat to our safety and security, clearly and indubitably. Why? Why? What kind of stupid question is that? Because He Was There.
Anyway, we do not really want tourists in the Greater Zetlandics, we want permanent residents with talent, cash, children to send to our schools, and cash. They can rent one of the many vacant houses hereabouts and start thriving and imaginative businesses with their cash, thus making more cash which they can spend in one of the 27 different cafes which have just opened in Commercial Street.
They will probably have been attracted here by watching that deeply moving TV saga of everyday detective folk, Shetland, known by all those of us desperately wishing to enrol as extras (A haggis supper a day and a chance to try on Jimmy Perez’s designer donkey jacket) as Braggart. It’s Taggart crossed with Lord of the Rings  (“There’s been a Mordor!”).
The new series of Braggart has started filming, with moody scenes of Perez (1) walking along a beach, and (2) standing outside a ‘police station’. It is rumoured he will also be seen on a ferry, on boggy moorland and in both Greenock and Largs, but none of this has been confirmed.
Speaking of permanent residents, it seems we are to be infested with space travellers. Despite the announcement that Sutherland is to be the site of Scotland’s first ‘vertical take off’ rocket launching site (as opposed to ones that go sideways). There has been a huge fanfare surrounding the signing of a Vaguely Non-Committal Memorandum of Possibility (a VNCMP) indicating that Lockheed Martin may or may not site an old Kia Sorrento with a satellite dish on its roof in Unst, which is an island north of Shetland, to track fireworks each Guy Fawkes Night. This will lead to Unst becoming “the Tracey Island of Europe” according to Informed sources. There will be jobs. There will be cash. There will be displacement of sheep and puffins. There will be cash. Laika-like, I may be called upon to travel to the moon, or Uyeasound.
Or possibly not. Thunderbirds Are Went. To Sutherland. Woof! I’m off to chase an astrophysicist. I am Zetdogg!
at July 18, 2018