The truth is, despite what Zetdogg, aka Dexter may have said to you over the past few weeks,  he’s a mutt. A mutt whose lineage is uncertain, who arrived in Shetland from one of the dodgiest of dodgy puppy factories  to be adopted by Catriona, whose car and house he proceeded to eat. 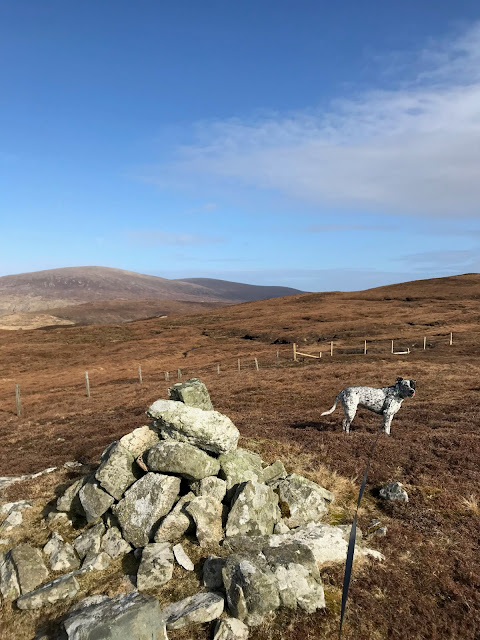 I don’t know whether Citröen Berlingos are particularly tasty, their seat fabric recycled from unwanted Winalot, or why Dexter took such a panicked desire for the wholesale destruction and then consumption of  Catriona’s soft furnishings, but he did. He then processed and defaecated the lot safely out again - in the car and house, of course, where by dint of Catriona’s work schedule, he had to stay. He peed a lot too. On the whole, you can understand why Catriona advertised him as free to a good home with a garden and owners with time to let him out into said garden. And a less edible car

We think he’s a cross between a sheepdog - Border Collie type - and the ubiquitous urban bruiser known as a Staffordshire Bull Terrier. This means he combines high intelligence and athleticism, great eyesight, a desire to round up and fetch, and general trainability with dogged, absolute loyalty, a stubborn refusal to let go of something you try to take off him, enormous upper body and neck strength  and a territorial possessiveness.

And from the moment of arrival, aged about 18 months, until now, four years later, he’s been a joy. He has eaten nothing dodgy save the dried dog food and, ahem, table tidbits he has been offered. Well, except for that time he ate one letter the postman left on the mat. Didn’t touch the other five, just that one. Who had been handling it? Possibly a Citröen  salesperson. Oh, and the unchewable, dogproof balls and ‘flying discs’ (you’re not allowed to say ‘Frisbee’ unless it’s a real Frisbee, and ours weren’t)? he ate them. All of them. And an industrial mooring buoy for a fishing boat. No ill effects. Some curiously-tinctured-and textured ordure.

I should say that he really doesn’t like the postman, postwoman or anyone wearing hi-viz clothing, which may relate to his early days in puppyhell. He dislikes the open inter island car ferries in Shetland I think because the ferry crew all wear luminescent yellow, and the kennels on the overnight boat to and from Aberdeen are a horrorshow of yowling, urination and a kind of terrible, glum acceptance. If he travels with us, we now just leave him in the (well-ventilated) car, with food and water. He never eats the seats. Or soils the car in anyway, even if left for almost 12 hours. But then, it’s a Volvo.

Not that he’s ever actually harmed a postal delivery executive. He accidentally closed his jaws on Andrew’s hand once, but he was delivering a postcard from Paris, and you know what’s made there. It never happened again.

He’s incredibly agile, friendly to other dogs and we love him dearly. Our attempts to provide him with a companion - when he arrived, we had an aged St Bernard who treated him with bored Swiss contempt; see The Chronicles of Rug and Dexter - failed last week with the brief sojourn of Big and Bouncy Arnie the Rottweiler. It’s fair to say that they did NOT get on. And a full-on battle between the Staffie side of  a cross like Zetdogg and a Rottie is not really sustainable in a  busy, much-visited household.

So anyway, this sounds as if we’re trying to sell him or get rid of him, and we’re not. Zetdogg remains, delights and barks at people wearing reflective yellow jackets.  He guards the house and family against evil otters, blackbirds, rabbits and wrens. He can fetch, beg, shake paws, lie down, roll over, play dead, turn around and understands we think about forty words.