Still stranded in the city of sewage and squirrels: Zetdogg lives!

Instead, here in the very naval of Scottish intellectual might, the belly button of Bohemianism, here in the west end of Glasgow, I have helped and supported the Human Companion as he has striven to clean, paint and generally prepare for sale his son’s top floor tenement flat. There has been a great deal of swearing, surreptitious dumping of redundant IKEA furniture (“No chipboard” says the man at the recycling centre) in the hope that some hapless, drawerless person will remove said wobbly lump of Swedish furniture and do something useful with it. In Shetland it would be sold to Captain Calamity who would use it as a boat, probably. Chipboard is a fantastically floatable substance, especially when wet. 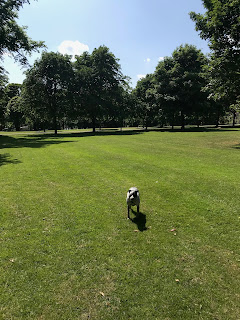 So I’m told. But what would I know? I , after all, am Zetdogg, a combination of Staffordshire Bull Terrier, sheepdog and...something else. It so happens that insight, intelligence and the ability to communicate with you, my parishioners, has arisen from this random set of genes. And I for one am thankful. Think how dull it would be to live as a Labrador.

Two wee girls took a liking to me this week and offered to buy me from the HC. We have always wanted a Dalmatian, they said. I have never been so insulted in all my life. One of me is worth 100 spotted pedigree dimwitted spotted objects. Or 101.

It has been hot again, weather wise, but with a sudden onslaught of rain which caused the River Kelvin to burst its banks, depositing a noisome mixture of sewage, toilet paper, diesel oil and chemical residues all over the Kelvin Walkway. Delightful. Yet still the HC daintily picks up my own somewhat less smelly ordure and disposes of it in plastic bags, while seriously deluded canine compadres allow their beasts to actually swim in the foul, olive-green depths of the Kelvin itself. 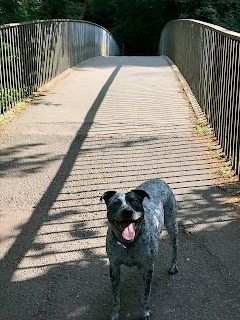 Collies, Spaniels, even Poodles all swim as if their lives depend on it, in pursuit of ball and Frisbee, stick and human approval. I, Zetdogg am beyond such blandishments. I fear for the future health of these animals. How are they cleaned? I overheard one woman telling the HC that her Afghan Hound loved a good bath when he got home. This is unprincipled behaviour and not deserving of approval. These are dogs who have never known the sea.

One interesting adjunct to my current location is the presence of large amounts of foliage and indeed mature trees, something quite rare in the Zetlandics. These house a variety of creature worthy of pursuit, if one is in any way bored. Magpies are black and white birds, hardly as impressive as our own Black Backed Gulls, as eaten by the Faroese along with puffins, Razorbills and whales, which are not birds and extremely uncommon in the Kelvin. I, being unable to fly, usually do not bother to give chase. Squirrels, though, a  kind of tree-climbing whitrit, are something else again, and apparently not just tasty in a somewhat crunchy way, but in their grey form (and I’ve never seen a yellow one) an acknowledged pest. I hope to have learned to climb trees by the end of this tenemental sojourn, though this may be beyond my undoubted native agility.  We shall see.

Meanwhile, news is filtering through from the Zetlandics of upheavals in air travel, with humans being forced to pay to leave their cars at Sumburgh Airport and BP, an evil oil company, moving their helicopter operations from the old wartime airfield of Scatsta, which is council owned, also to Sumburgh, which is owned by the evil Highlands and Islands Avaricious Airports. Evil begets evil, I suppose. Like cats and squirrels.