Zetdogg, episode 3: I cavort with greyhounds and ponder their digestive tracts 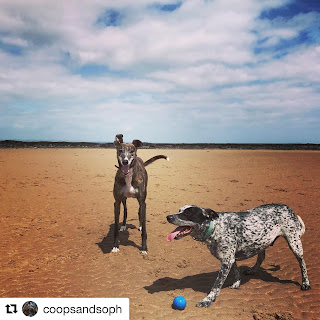 Greyhounds. What prima donnas they are!

Well, the pair I’ve been associating with, Cooper and Sophie, Coops and Soph as their Human Companions call them. These are actual, tattooed veterans of the race track, in recovery from their steroid-and-amphetamine years, but my, are they sensitive, delicate creatures. The slightest nip or good-natured nudge and they’re yowling like smoke alarms after a too-thick sourdough toasting incident. And like sourdough and ‘Natural’ wines, they’re a hipster thing here in the Dirty City.

My own HC’s son and daughter-in-law house, walk and clean up after Coops and Soph (see? I have fallen into the hipster slang-trap; it’s like Shetland dialect only more obscure), and for the most part, this pair of retired betting-fodder hounds seem easy for them to look after. They sleep for hour after hour, drape themselves decoratively over the IKEAstuff and generally behave like giant cats, only not intrinsically evil, obviously. Friendly, too, in a distant sort of way, especially Soph(ie). 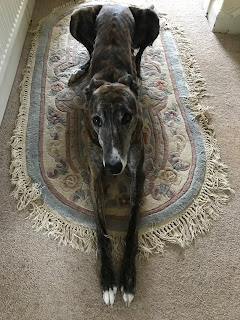 But you don’t want to upset them. Then, as mentioned, they go into canine meltdown, though it has to be said they do injure easily. One tuft of hair withdrawn in jest and they’re rolling around as if they’ve been battered with a baseball bat. Which admittedly, in their sordid competitive past, they probably have. And they do have very little hair.

They can run fast, though. Up to 40 miles an hour, though it takes them a little time to reach full speed and a lot to stop. Which means there was a great deal of innocent amusement to be had during a recent weekend in North Berwick, leading them off on a ball-chase and sending them hurtling headlong into the sea due to my superior manoeuvrability and braking. Salt water is not the greyhound’s friend.

And they defecate almost as fast they run. Four or five times a day, copious amounts in a variety of interesting colours and textures. I noticed my own HC’s ashen face as he took three of us for a walk which involved seven - SEVEN - of the euphemistically named poo-bags, and even some tissue paper and wet wipes. I felt ashamed for Coops. Cooper. And bad for my HC who is not used to such hands-on ordure activity. Mind you, the hounds are rib-protrudingly thin so presumably they are built not to absorb, but to expel food. A fat greyhound doesn’t bear thinking about.

As for me, you will have gathered that I am still not back in the Zetlandics. This, I believe, may be my final week on the Main Land of Scot, and is to be highlighted by a stay in the intimidatingly grey city of Aberdeen, which, like North Berwick, has a beach, though not quite as many pugs and Lhasa Apsos per head of population. 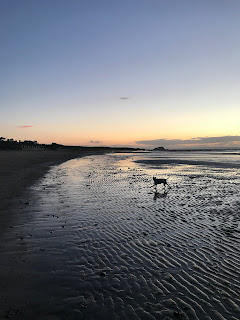 I look forward to my Zetlandic return, though I am hearing whispers that change awaits my domestic situation. There is a talk of an additional dog. Just as long as it’s not a greyhound. Actually, though, I like Sophie. She's a bit of a doll (though it was her extracted some fluff from Cooper's side and sent him into paroxysms of demented huffdom).

And Cooper's not bad either. I suppose you'd get used to carrying panniers full of excrement-receptacles around. Eventually. 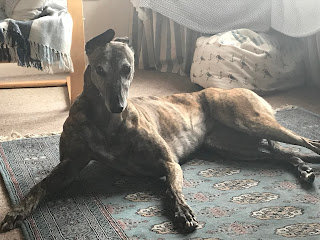